We recently received an update full of hopes, aspirations, dreams and challenges, from our partner organisation in Kibera, Kenya and we wanted to share it with you!

Spurgeons Academy is a school situated in Kibera; the largest slum in East Africa, 1 square mile of devastating poverty.  The school provides an oasis for the children that attend it, and for whom education would be otherwise inaccessible.

2 Stories:
Kenyanito, the director of Spurgeons, asked that we particularly bear in mind 2 of the pupils who are having a hard time at the moment. These are their stories:

Ricky – He has spent the past 2 months in the national referral hospital, terribly ill with Meningitis TB.  Ricky is around 10 years old. Though he has now been discharged from the hospital, his widowed mother is unable to pay the steep hospital bills.
Jackline – At the age of 14, Jackline’s older sister and only sibling was married off due to poverty and this left Jackline, barely a teenager, to singlehandedly nurse their sick mother who sadly lost her battle with HIV/AIDS last month.  Despite her loss, Jackline is due to return to school this term where Spurgeon’s will provide her with as much support as they possibly can.

Other News:
This is what has been going on there lately and also what’s coming up in the next few months:

> The recent general elections were thankfully relatively peaceful but the conclusion has left the country quite divided.

> The Academy is in the process of interviewing and recruiting new staff members which is not easy but is exciting – the beginning of new things!

> They have recently suffered some cuts which are making life difficult for the staff in delivering the vital services that they provide to the children in their care. If you’d be at all interested in supporting Spurgeons through fundraising or on our team trip there in 2014 – contact us as info@credteamtrips.org

> Kenya has been pretty rainy lately! Some of the children have a rather muddy walk to school at the moment. Hopefully they will still be able to make it to Spurgeons. Let’s keep them in mind!

> Spurgeons have had a successful bid through for the rebuilding of the school. This is such great news! Building work starts this month so they’re going to have a busy time on their hands with school running as normal, alongside the construction work but it will be fantastic to see the new facilities up and running later in the year! 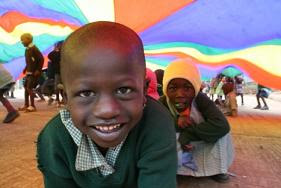 THANK YOU for your continued support of CRED and our partners! Their work is making a huge difference to the lives of many of the world’s poorest people and it is a privilege to be able to come alongside them, through the help of people like you.

For more information about our Team Trips or any of our other partners, visit: www.credteamtrips.org
Posted by CRED Foundation at 10:34