In P6 our lesson was about the circulatory system. The children hadn't learned this yet, so we were stepping onto new turf. The class got stuck in and asked questions if they didn't understand. Teaching the children a new subject felt really good as it feels that we haven't just taught them about things that they already knew, but also that we have been teaching them completely new topics as well.

The kids always take great pride in their work and after four days of lessons and activities, P6 is now a much more colourful room, with a large world map, paintings, drawings, diagrams and pieces of writing now covering almost all of the walls.

Our morning activity was disrupted today as a group of students from Atlanta, Georgia in the US visited. The Spurgeons students sang a number of songs led by two girls from P8, and had everyone joining in with the dancing and actions. It was great to see the whole school coming together and hearing them sing. The American students then sang a few songs themselves for Spurgeons, which had the kids singing and joining in with actions again.

In the afternoon, we went straight into our afternoon activity where we had the class split into three teams and they did relay races such as running, backwards running, skipping, space hoppers and balancing bean bags.

After activities had finished P1-6 joined together for the stage activities where elephants, giraffes and lions competed against each other for points which will be totaled tomorrow.

The other half of the team then went on home visits. Those of us in P6 visited the home of a girl called Diana in our class. She is 13, and lives with her 9 year old sister, stepmother and her father. Her father has not been to work for 3 months now as he is sick, which has been a blow to the family as he was the main breadwinner for them. Their home was about 10ft by 12ft, and there were two beds, a small table, a cabinet with a television on top and also a sofa/bench type chair. They cannot always afford food, especially since the father became ill, and he told us that if there was anything we could do that would help his daughters achieve their dreams, it was very greatly appreciated. Both of the girls like Spurgeons, and would like to become air hostesses. They arrive at school at 6.30am and leave at 6.30pm, and do revision or other activities between the end of the school lessons and the time they leave Spurgeons.

Seeing how they were living and the conditions around their home and the rest of Kibera that we walked through, was a real eye-opener to the differences between not only the UK and Kenya, but also to the differences between what the two countries consider 'poverty'. It has shown that there is a lot to be grateful for, and that at least if we are 'poor' in the UK, that if we have no job, at least there are systems in place to help those in need, whereas in Kenya people have to do anything they can just to live. For example, if he was working the father of Diana earned around £40 per month, £15 of which is needed for rent. The rest of the money then has to pay for food, water, electric, medical care, using a toilet, and if they aren't sponsored, the money is also required to send the girls to school.

home visits: P1; Laurie, Briany and Jade accompanied by Barbara and Josh the camera man went to a young girl named Janet, she is a sweet quiet girl who we had not interacted much with, her family was very welcoming, i felt like an honour to be in their home. their living room is not much bigger than a downstairs bathroom, there was 1 bed for 6 people, literally a cupboard for a kitchen, they own 1 chicken which they take turns to have an egg, they would wait and let them hatch so that they could have more but they never have enough food so they have to eat them, they only eat once a day apart from two of their children who go to Spurgeons which gives the children breakfast and lunch. finally the uncle said that if Spurgeons helped Janet with her dream of becoming a teacher then he will be the happiest man on earth and this made the whole group well up as we have contributed to.

Carissa: the P3 trip to Ben’s house was a serious eye opener. His family and him live in a house smaller than my bathroom, with 1 sofa, 1 broken, chair, a fuzzy black an d white TV that is hardly working and a curtain for a door. Once we had taken in the house our group began to ask some questions on Ben’s family. Ben lives with his mum, brothers and sister and a toddler his mum took in, since the toddlers parents passed away. Ben’s dad had also passed away. His mum raised him and his siblings single-handed. Then after the questions on family we asked about how far thy have to walk to get water etc. Luckily his mum said there was a water pump near the house. However, the toilet is quite a way away and you have to pay to use it. So when his family don’t have enough money to pay the toilet fee they us a ‘flying toilet’ – they just go in a plastic bag then literally throw the bag away. As for getting food, Ben’s mum has to sell charcoal to pay for their measly bit of food. When she doesn’t get a good sell, the family doesn’t have any dinner. The same goes for the rent, she doesn’t sell enough charcoal then she has to beg the landlord for more time to pay. So times are hard for the family when their mum doesn’t sell much. This is pretty often as the other people in the slums are broke also, and she doesn’t sell outside the slum unlike her neighbours. Yet even though they have so little Ben is always such a happy boy. That is the eye opener. You don’t need money for happiness, you need family. 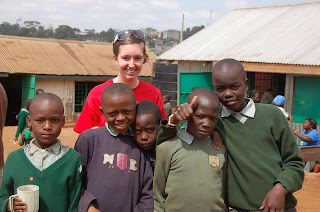 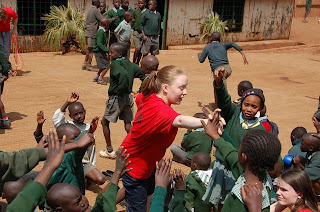 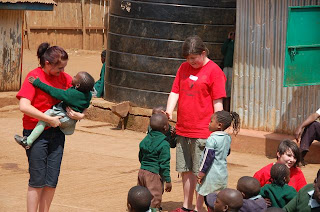 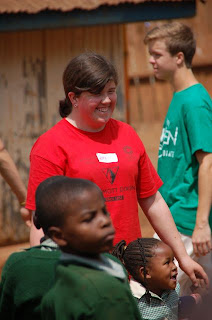 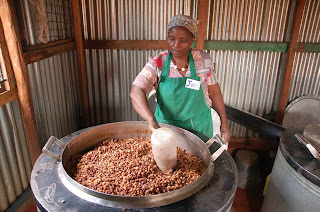 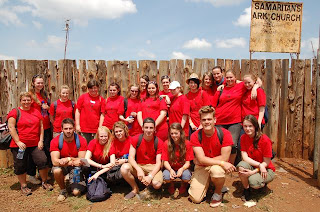 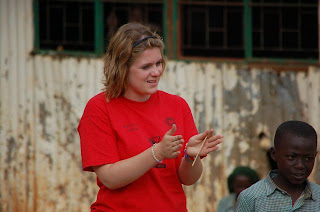 Posted by CRED Foundation at 18:13

Great to see the group photo. Keep up the good work Team Kenya :-)
Carrie, we're all very proud of you and it's wonderful to see that smile of your's still beaming xx

Nice photos good to see your all smileing :0). I had a call to say your feeling better Bobbie thats good, Remeber to all wear your hats and drink plenty of bottled water. Great photos well done everyone !!!

Sounds like an incredible time you are all having, how amazing!

The comments may be getting fewer, but we are all still thinking of you. We are more proud of you all every day when we hear what you are doing! I think you are actually leaving us all speechless!

Lesley and Ken (and Terry) xx