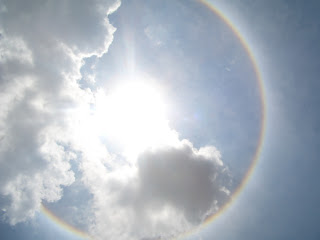 Day 5 – (Sophie, Alex, and Emily)
This morning we woke up to a blistering rainfall and another early start with everyone raring to go. With all of us sporting our team raincoats, there were three people who stood out: Bex with her RED rainjacket, Katie rocking her PROSTAR shorts and Emily who needed a paperBAG for her face after her cheeks swelled up during the night.
[Editor: it seems there's an in-joke to get certain words into the blog each time...]
The journey began with a slight sweetie variety appearing on the top of Alex's ear....... That's right.... an orange jelly bean! We also enjoyed a lovely sing song with everyone's input all the way throughKibera.
Arriving at the Spurgeons Academy the children were on their break - they were so happy to see us again and we felt the same. The plan of the day was to split into two groups, with one working with the children from kindergarten and the other working with the football coaches. This plan was quickly adapted when the weather started to take a turn for the worst, we couldn't believe we were in Kenya, we were told that it hadn't blistered down like this in 10 months! 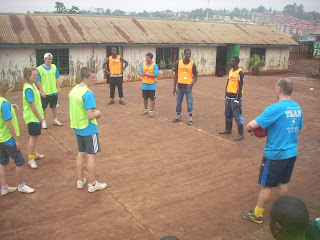 After 45 minutes of being inside the church hall with the young children the weather finally dried up and the group working with the football coaches began their drills and exercises which every coach was highly commited and very interested in the learning and the participation. There was a variety of activities that not only Scott and Pete led but us too; some of these were working on the finish, the touch, the defending, attacking and their goalkeeping which everyone enjoyed. I must say Soph and Kates showed up the boys with their soccer skills. We don't know how they managed it in the blistering heat. 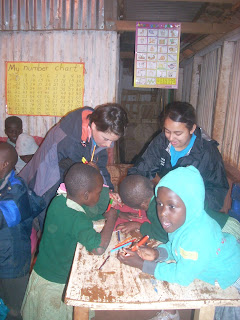 While half of our group were with the football coaches the other half were playing with the kindergarten kids. Initially we got to know the children by drawing pictures with them - they were so excited to have one on one contact with us after seeing the rest of the school enjoying themselves on the two previous days. They were crowding round our tables asking us to draw numerous pictures, including dinosaurs, cats and giraffes. We then went out to an area where we played with parachutes and bubbles which they loved. 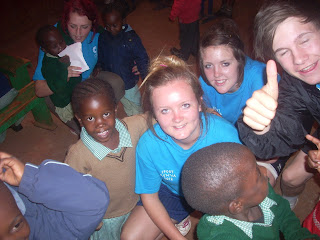 Dave was really loving interacting with the kids, 'GO ESPANA'. Emily, Bex and Alex got stampeded by children when we brought out the bubbles, Alex thought that she was going to get dragged under. 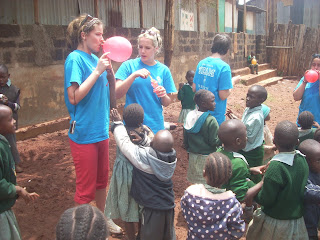 Yet again we had a lovely meal at Kenyanitos, we all piled in to his house sitting on any surface available so that our sunburn did not blister. After half an hour we headed back to the school on the minibus and coincidently were craving sweety treats. Charlie was struggling with his red neck and everybody made sure that he knew! And Jess informed us that she had reached double figures, whatta machine! 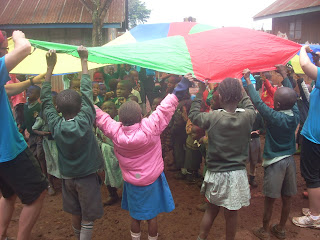 We cant thank Helen and the rest of the team enough for their amazing organisational skills and how smoothly the trip has gone so far. Missing you all loads.
Over and out, Miranda, Chinks and Jelly Bean!
aka Soph, Em and Bubs xxxxxxxx
Join CRED on Facebook or Twitter (@CREDFoundation)
www.cred.org.uk
Posted by CRED Foundation at 16:34