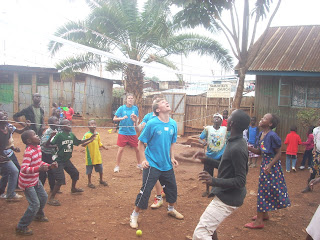 After an emotionally draining day yesterday the team woke up full of enthusiasm for the coming day.  On our daily route to the school we were met with a sight that made everyone proud, one of the coaches from yesterdays football workshop was delivering one of the drills totheir team on a local pitch.  This was amazing to see and to think that the skills they were  taught only yesterday were already being sharedand passed on.

Arriving at Spurgeons at a slightly later time today we were met with the usual ecstatic and beaming smiles of all the students.  Today was all about thinking on our feet; as soon as we arrived all of the leaders 'dived' into the storage container to get as much equipment aswas possible to carry in the ever growing, swarming crowds.  As this day is a public holiday (Good Friday) the children were not wearing uniform and it was not compulsory for the children to come to school, which of course did not stop them.

During the course of the day RED bracelects were made by absolute PRO'S.  They were truly STARS.  The wool for these bracelets came fromone of many BAGS of arts and crafts stuff that was bought over. 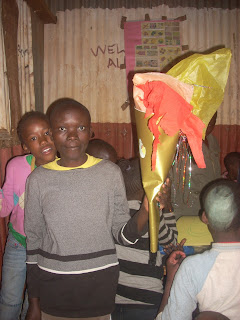 Throughout the day olympic torches and flags/banners were made representing each country in preperation for tomorrows mini olympics.  All teams were very creative and managed to come up with verycolourful, unique and inventive torches.  After all the flag making was done, team America surrounded Mr Poppy (a.k.a Dave Atkins) and begun to braid his hair.  This swiftly formed into a row of the leaders (Bex,Emily, George, Charlie, Alli and Gwynny) who left Spurgeons at lunchtime with tightly braided hair. 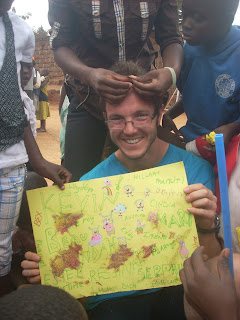 On the topic of lunch, once again Val (kenyanito's wife) had prepared an amazing meal for us. It was hard for everyone when we arrived back at the school to get the kit and equipment ready for tomorrow because the children were yet to be dismissed.  This meant that we all had to stay on the bus until they had left - this took some time as they all crowded around the bus trying to high five everyone as a way of saying bye.  Even when we entered the school again there were still a large amount of children eager to show off their football skills. 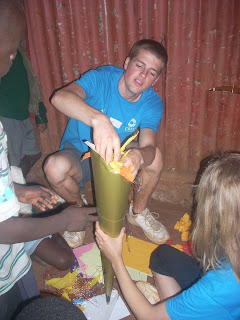 Also joining us at spurgeons today were a group of widows from the kibera community, they brought hand made merchandise to sell.  Many of the group bought items from bracelets to sculptures.


On the bus ride home the team where yet again happy to see one of the coaches from yesterdays workshop sporting a full Brighton and Hove football kit.  However, the team were not so impressed with a certain someones interpretation of 'summer of 69' (ay Uncle Jim).


See you all in a couple of days!


P.S- a massive shout out to Harriets sister, Frankie who is competingin wales over the weekend at the championships of Great Britain on her pony. GOOD LUCK all the way from kenya! xxxxxx