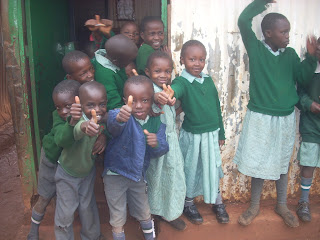 Day 6: Thursday, more than half way through :-(

After a long night of cards which proved the Gwynn Family were a pair of “pooheads”, we woke up to glorious... clouds.  The early birds went for their hot showers, while the majority of girls (and George) decided against this idea for an hour's extra sleep.  We loaded up the bus and headed to Spurgeons'.

There waiting for us were the football coaches from yesterday, eager and ready to go.  We started off in the classroom discussing tactics, with the coaches constantly asking questions to our resident coaches Arsene Gwynn and Sir Alex Pulling. 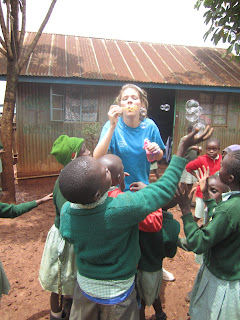 Whilst this was happening the rest of the leaders were playing with the kids.  Many kids were spotted running around wearing various items of Dave Atkins' (AKA Mr Poppy) clothing.  My favourite was one child wearing his sunglasses, wearing a flag for a cape and walking round with true swagger.  The playground soon erupted into singing games and follow the leader and many children made a long paper chain to hang on the ceiling. 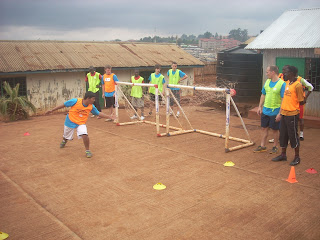 With the football, we started off with Ken's warm up which showed up the British leaders fitness levels.  We were then put through many different training sessions by the coaches before a break, which involved more discussions about tactics with the Kenyan Coaches eager to learn more about different formations.  We then dished out some stuff from the red bag.  The Kenyan coaches were delighted with their prostar shorts and the Brighton and Oxford shirts (We did have to explain that both teams were good, they just tend not to show it....).

By lunch the whole playground was covered with proud children showing off their drawings of all the leaders, with a cartoon of Sophie Tribe and another of Lillie with a head full of bright blue hair standing out. We soon saw all of the leaders stroll out covered in pen themselves. 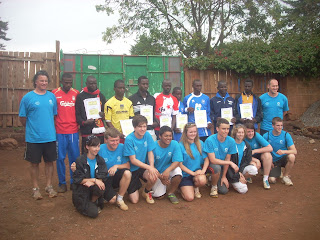 After another feast at Kenyanito's we arrived back at Spurgeons each with a handful of carefully written certificates to give each of the children individually.  The children all had a beaming smile as we handed out their prizes and their competitive nature came out as they all compared their scores.  One beady eyed kid let it be known that he wasn't given the correct award by Bex and Dave in team America.  That bronze should have been a silver...!

We were then put into groups of two with a teacher from England and a teacher from Kenya, and one child from the school lead each group to their house.  Laura, Lillie and Helen went to a young boy's house called Jacob. 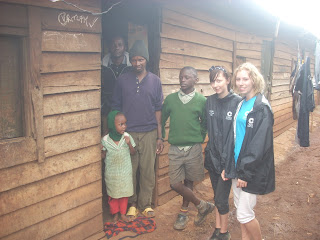 The route to his house led us through the sewage.  When we arrived at his house we were welcomed into what we soon realised was just one room.  We met his dad and uncle who were busy chopping up meat, which they would sell to make money.  There were flies all over the meat, and the smell was awful; we can't imagine what it must be like to live there all the time with that, and no other room to escape to.

We asked many questions and Jacob's dad answered them.  We then listened to their life story about how their mother lived in the village running her parents farm, and Jacob informed us that he and his sister only get to see their mother once every 2 months. 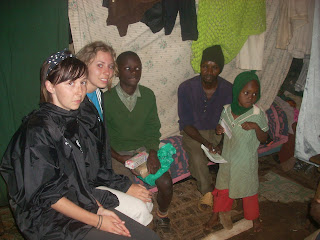 Jacobs dad sat and told us that he has so many problems in his life that if he was to sit and tell people then there wouldn't be an ending, so he just hopes and prays for what he has, and he also told us that he wants us to pray for him too.


Another touching story was from a family which lost its mother last week - the father had to go up north to arrange the funeral.  He had paid tribute to her at church on Sunday.  The children were left with their 17 year old auntie.  Mary (age 8) had her little brother on her lap (age 2), whilst Collins the teacher was telling us that when the dad gets back, Mary and her older sister will have to spend all their spare time looking after their younger sibling.


Both Families showed how strong the people of Kibera really are.  From listening to the group's stories the home visits touched everyone's heart in a unique way.


P.s  A big well done to George for forgetting his certificates this morning but an extra well done to Helen for picking them up.


Love from, George, Nathan and Laura (with help from Lily, Sophie and Jess) xx

Get daily ideas and instructions for earning $1,000s per day FROM HOME for FREE.
GET FREE ACCESS INSTANLY