He moved me to tears!

I’m writing this from Ethiopia where I have been since Monday morning. Apologies that I haven’t blogged before now – there just hasn’t quite been the time, or reliable internet, but I’ve got a few stories stored up so will try and get them posted in the next few days.

Today’s blog is about the headteacher, or director as they call them here, of a high school that we visited, and an anecdote he gave which moved me to tears.

I’m spending a few days with an organization called Berhan Lehatsanet (BL) who are an Ethiopian NGO that focuses on activities that help disabled children access health care and education. I’ll go into more detail about them another day, but today we visited the Hawassa office which is about 300km south of Addis, and heard about some of their programmes

One in particular focuses on enabling better education for women and girls, not just those that have disabilities, but also those who are hampered from completing their education for other reasons.

The programme came about after the office workers discovered that there is a worryingly high drop-out rate amongst teenage girls, accompanied by poor results for many others. On further investigation, it was found that reasons for this include – early childhood marriages, abduction and trafficking, rape, harmful cultural practices amongst other things.

So, a programme has been developed that does a few things:

One is that it gives extra tutorial time to the girls, which results in them getting better grades. This in turn is encouraging news to their families, as well as themselves and increases the chances of them continuing with their education. The teachers have had training on the value of this and are so positive about the extra tutorial programme that they will teach it, even if funding isn’t available to cover their extra hours

But many of the reasons for drop-out are beyond the girls control, and better grades alone can’t solve the problem. Enter the educator champions – one per community – who is a well-known, respected and admired member in that particular community. These champions are equipped to raise awareness about education in the community, and the value of all students being able to continue to the end of high school at least. They also address, in a culturally sensitive way, the various reasons that girls are dropping out, and challenge individuals to reconsider their attitudes. Brilliant!

So, that’s the background to today’s visit to Tulla High School – a school that is regarded as a model school regarding inclusivity. Whilst there we met the director, Tizazu Bandaw, and he told us how inclusivity is carried out in the school. Various ways – ramps to classrooms, provision of suitable materials, training for teachers (90% of them have had training in working with disabled children and ensuring inclusivity), and the tutorial programme for the girls. As a result the drop-out rate has dropped significantly, and the percentage of girls passing their end of years has increased from 35% to 72% in 3 years. Last year’s figures are expected to be even higher, in the region of 95%. All very impressive and really encouraging to hear how universal access to education is being pursued so passionately.

And then he told me a story about two girls in particular, and the true depth of that passion for full access became even clearer.

In February, two year 11 girl students reported to the director that they were going to have to leave school as they were being forced into marriage. Both girls were upset, as they very much wanted to complete their education, at least to the end of year 12 which is the final year before going on to university. One of the girls was being forced to marry a guy just a few years older than herself, the other was marrying a man about 15 years older.

At this point the director could have commiserated, but said that it is a family issue and not for him to get involved with. But in this case Tizazu took a different course of action. He went and visited each of the men in turn, and over time he won their respect and discussed with them the benefits of the girls staying in education – increased financial potential for the girls to get good jobs, the girls would make better wives and mothers, and they would feel more fulfilled etc. He didn’t rail against culture, or tradition, or outlaw the guys in any way; instead he just helped the men to understand how there could be ways of bringing education into the marriage place, and not having to have one or the other.

Having got the hesitant agreement of the guys, he then went to each of the girls’ families, and had similar conversations. As a result of gaining the approval of families, each of the guys then felt that they had the blessing from the older generation to allow their wife-to-be to continue with their education.

And so in the year 11 class now there are two students who come to school in the morning with the blessing of their husband, and who are looking forward with hope to completing their secondary education and going on to university. All thanks to Tizazu, who believes so strongly in education for all that he will go above and beyond to try and make that happen.

The thing that brought the tears to my eyes was partly the story itself, but also the fact that it was being told by a man. So often we are told that it is men who are the problem behind the gender inequalities in life – but how often do we hear about the men who are fighting in the corner of the girls? How many stories tackling equality for women and girls have a man at the centre of them as the hero? Yes, there are some, but not many and it was so good to meet one of those heroes today.

Here’s to all the guys out there standing up for equality, in whatever field – may they be blessed today. 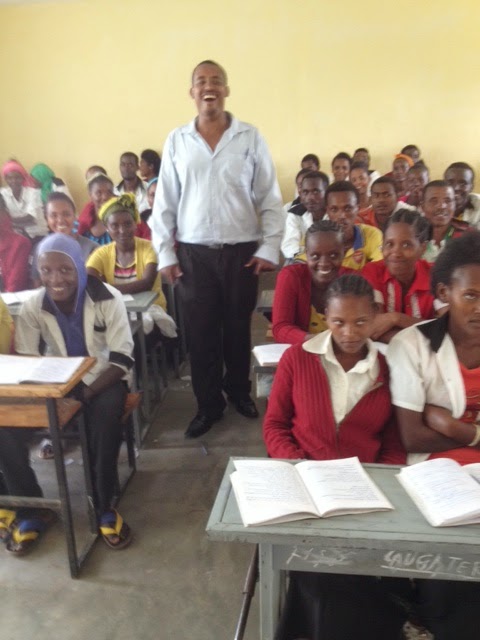 Posted by CRED Foundation at 14:35