A summary to start with

The day started in the usual style – breakfast of omelettes / scrambled eggs / bread and jam (or in Dan and Jimmy’s cases – all 3!) – then off on the vans to the project.
Everyone has settled into the rhythm of the  programme now, and different classes were enjoying all sorts of activities.
Carl and Goergia’s group, ably assisted by Jacob, Juliet, Hannah, Dan and Mikayla started their day using a mini-Olympics as a method of data collection that then went into a maths lesson. So the children enjoyed getting timed on the 50m run, tossing the beanbag into circles of differnet scores etc and then learning about mean, mode and median!
The oldest ones, under the eyes of Leonie and Ruth, Chandos, Evie, Erin and Alex had another lesson of algebra which they all love doing, before progressing onto ftiendship bracelets, learning the cup song and other activities.
The littlest ones enjoyed a range of activities due to the lower concentration levels, including dancing, play-dough, colouring, collages, parachute etc. These were all led by Mel, Louise, Lexi, Angelica, Elias and JJ.

Jimmy and Kizzy led some whole team fun and games including the dressing up game, which basicually involved most of our team members donning a variety of hats, gloves, scarves, jackets and eye-patches, and the kids doing a relay to ‘undress and redress’ them!!! Lots of fun was had by all.

The day at the project ended with free-play, and during that time the last 2 groups went on home visits. These are described below, and whilst we all see them as an integral part of the programme, as it helps us to understand better the background to the lives of the children we are working with, it is still very emotional and sometimes quite harrowing to see just how appalling are the conditions that some people live in.

After the project, we had a special treat on the way home, as we had been invited to visit a local family, who we got to know through Angelica’s grandparents, and enjoy tea, cake, sodas, and the traditional coffee ceremonay. It was interesting to see how a ‘middle class’ Ethiopian family live, and it somewhat bridged the gap between the bottom end of life as seen on home-visits, and the top end as experienced when we went for a swim at the Hilton yesterday. A very special interlude in a busy week.

Tomorrow is the last day on the project – a time of celebration and good-byes, so the emotions will be high again! All good stuff though, and such a privilege to be out here seeing and serving an amazing project in Women At Risk.

Home visit 1 – Helen and Hannah
The home we visited was the home of Tukano who is a 12year old lad at school with moderate cerebral palsy. He can walk, but unsteadily, and needs assistance coping with steps and uneven ground. He also has considerable associated learning difficulties, but is always smiling and keen to be involved in everything going on.
When we got to where he lives, it was initially by way of rough roads, and then we walked down a muddy uneven pathway off the road to reach a doorway that we stooped through into a covered, pretty squalid, common hallway to 4 single room shacks. The walls seemed to be a mixture of mud, plastic sheets, old curtains, and anything else available, and the ground was plastic on mud.

Tukano’s home consists of a tiny, single-room dwelling, that has just enough room for a bed and a couple of stools and a set of drawers. The light came from a single candle, as they can’t afford the electricity. The cooking is done on a charcoal stove that is in the room with everything else; and the toilet is the local river.

Tukano lives there with his mum, her husband, and his half brother Aob who is 1 ½ yrs old and suffering from Down’s Syndrome. Tukano has to walk to his school, even though walking is so hard for him, because they can’t afford transport.

As we sat there and chatted with the mum, her story gradually unfolded, which started when, age 14 and recently bereaved of her mother, she went to Addis from her rural homeland to find work. She got a job as a housemaid, but was severely abused both physically and sexually, so she ran away. The next housemaid job she got turned out to be with a lady who ran a brothel, and thus Tukano’s mum fell into prostitution, and Tukano was conceived.

After 4 years of that sort of work, a friend told her about Women at Risk, and thus started the climb out of prostitution to the life she now leads. W.A.R provided her with health care, counseling, skills training, food baskets, and a small allowance; and they also paid for Tukano to receive physiotherapy such that he is now able to walk as he does today.

As an alternative income generator she makes beads out of paper, and sells them via W.A.R . However, with Aob at home all the time, and so very little space, she finds it very hard to get many beads made, so her income continues to be very small.

This visit was painfully hard for me on many levels – the simple fact of someone living in such appalling poverty was bad enough, but to have to manage two disabled children in those conditions was an extra layer of pain. And then there is the knowledge that in another society the boys could have so much support and provision – items reasonably considered to be basic human rights for those children, and yet largely denied them.
And on top of that is the story of how she got to being in such a desperate situation – of the number of people who have failed her, of the systems that have failed her, of society that has failed her.

Sitting in that dark little ‘room’ it was hard to feel much hope, and yet thanks to Women at Risk there is some hope for Tukano at least – he is smiling, has friends, goes to school and will be supported through school and health issues until he is 18 years; without W.A.R he would probably still be immobile on the floor.
Her story still needs a much happier ending than is has at the moment, and all we can do is keep supporting Women at Risk and the work they do, keep telling the story and keep praying.A couple of us prayed for the family whilst we were there, but the prayers need to continue, for this family and so many others like them. In some ways it doesn’t seem anywhere near enough, but we aren’t called to individually change the world in its entirety, instead just do what we can to make a difference in a positive way – and we can all do that, inspired and spurred on by people like Tukano and Aob and family.

Home visit 2 – Kizzy, Juliet and Gerogia
Tigist lives with her 3 year old daughter. As a teenager she was brought to Addis by her aunt who had promised her an education and a better life. But the realitly was very different. She was made to be a house maid for her aunt and cousins and the education she was promised was a myth. It feels as though it was only bait to lure her into the trap. Decieved by her only family she left and soon fell pregnant by her boyfriend at the time. Like many others, when he found out about the pregnancy he wanted nothing to do with her. To this day he doesn't even know he has a daughter. 2 months after the baby was born, with nothing to feed the baby, in desperation she turned to prostitution. Recently, after 3 years of this lifestyle she hated ,she joined the W.A.R programme. Tigist is only 23 years old.

This afternoon with Dan and Georgia, we visited Tigist's home and she shared with us her heartbreaking story. It was poingnant that Kizzy and Tigist are the same age yet their lives could not be more different.

For all of us it was our first CRED trip and we had no idea what to expect from our home visit.When the minibus pulled up we thought we might be visiting a modest but pleasant house to our right which made it even more of a shock when our guide Brikite took us to the left,across a sewage ditch and into a compound we would probabaly best describe as a slum. We followed Brikite and Tigiist down a muddy alley between canvas houses, dodging chickens as we went. We ducked through the low front door and were welcomed into a room which at first we thought was just a bedroom. Everyone was quite struck when we realised that was her entire house. A double bed almost filled the room expect for a chest of drawers and a small bench. It was remarklable that we even managed to fit everyone in. At first we were all timid and unsure where to begin. Tigist very much made sure were all comfortable and was kind to us but her face gave away a sadness beneath the surface.

She told us that her rent for the house was 400 birr a month, over half of her allowence from W.A.R. and so she washes clothes to supplement her income. She told us how her daughter used to be insulted by others because her mum was a prostitute. She had heard about W.A.R from friends who had completed the programme and was inspired to change her life in the same way. Although she is the early stages of the programme she said that her life is better already as she doesnt have to go out and work at night but can spend time with her daughter and wake up with her unashamed. This year she wants to gain a food preparation qualification and we hope and pray that if we were to visit her in a few years time we would see a different picture. As it is we all left humbled and in tears struggling to imagine living life as she does. We were really inspired by her strength and it brought to life how vital the W.A.R. programme is for women in Tigist's situation.

Straight from the school the whole group went to visit the family of an ex-politician for coffee. They were so warm and hospitable and it was a great experience but the shock from going between 2 extremes of Ethiopian lifestyle in such a short space of time was hard to take. 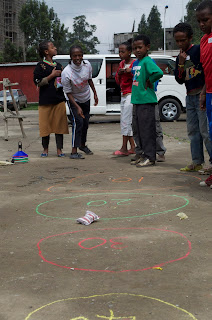 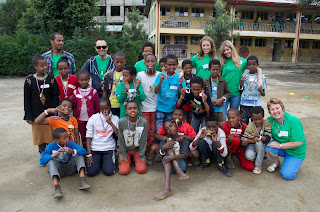 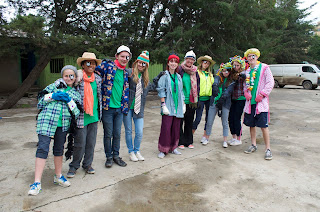 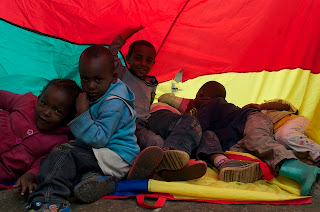 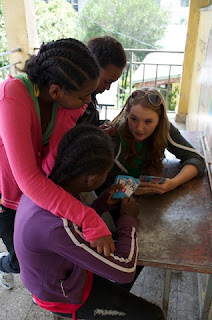 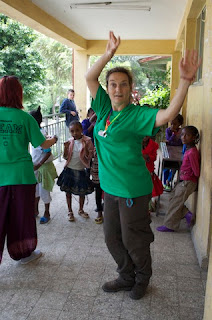 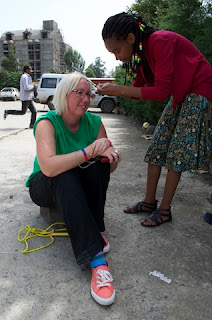 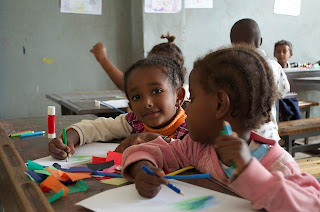 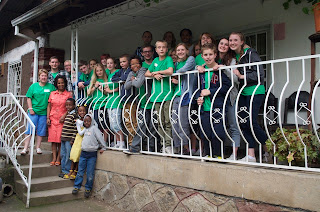 Posted by CRED Foundation at 16:24

When we didn't get a blog yesterday I assumed their was an Internet outage or some technical
Issue, and I hoped there wasn't any other problem. But, I was relieved to get your double whammy of blogs today.
Your experiences yesterday certainly tested your range of emotions - the teachers and carers in you all in the morning , then witnessing the hardships in the afternoon and finally the welcome & generosity of Brukkie and her family in the afternoon.
You have all done amazing work in the week you have been there and I know that you will return to UK with incredible memories if not as changed people on one way or another.
Love Julia, Dale & Ethan
Angelica - it seems Brukkie & her family were very excited to meet you. I hope you remembered their little gifts. X