Today we awoke to eggs and toast, along with cinnamon tea (?) in traditional African style; followed up by our usual amazing concoction of fruit. Then we were off, travelling by minibus to the Genocide memorial museum which can only be summerised as emotional.

The journey around the museum told the story of the 1994 Genocide, and how one community was torn apart. A comment stood out to us, where you were catagorised by how many cows you owned (10 or more cows, a Hutu. Any less, the minority, Tutsi). How can anyones life be determined by how many cows they own?

A room filled with pictures of lost strangers suddenly became a room full of people we felt we knew. Every picture tells a story they say, we couldn't help but feel the pictures were picked specifically to show traits of lost loved ones. In some cases they weren't even pictures, just words by family members.

The most emotionally straining room was yet to come. Empty rooms with pictures of specific children, their names, ages, food they enjoyed, and how they died. “Age 2, squashed against a wall.” in a church, where most would feel safe. “Grenade thrown in shower”, “Shot in head”, “Beaten to death.” How can any human being justify killing innocent children in such a brutal way. Next came this quote, “A tree can only be straightened when it is young”, the Hutu intention was to eradicate all possibility that Tutsi ideas would ever be known, therefore, killing children was their answer. No future generations.

Huge concrete graves were situated in the gardens, the luckiest were taken here, from shallow graves, or just picked up from where they died. Flowers were laid on an open grave, with the words “never again”.

To us (Katie Maw and Aliesha), we are heartbroken. We're trying to think of more words to desrcibe our expereicne and how we feel, yet there aren't any more. We will leave you with a final quote, again from the museum.

“He who saves one life, saves the world”

And just to mention that the rest of the day included visiting the Catch Up Centre to see what it is like, sorting resources and preparing for the week. All good stuff  that you’ll hear more about as the week goes on, but for today the blog focus is the Genocide Memorial Museum 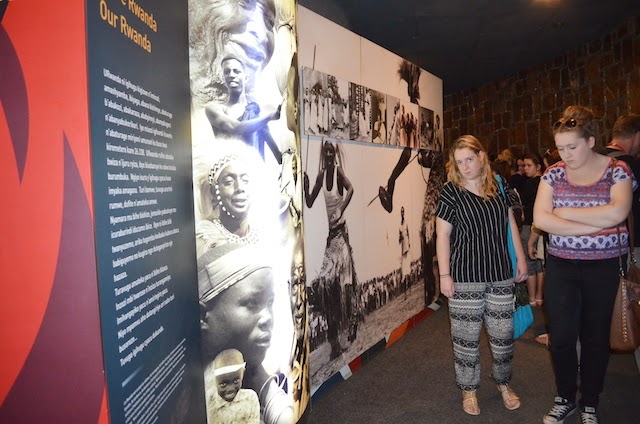 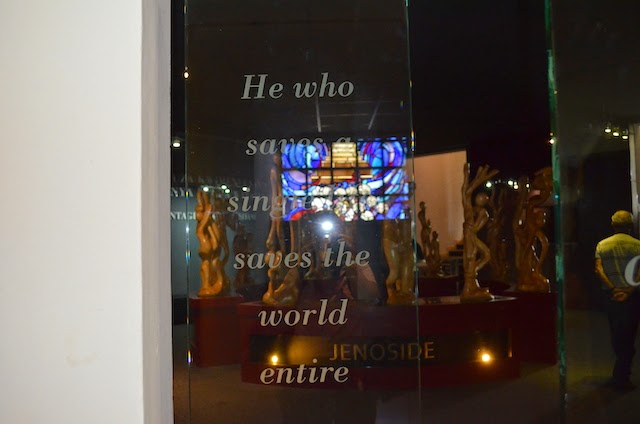 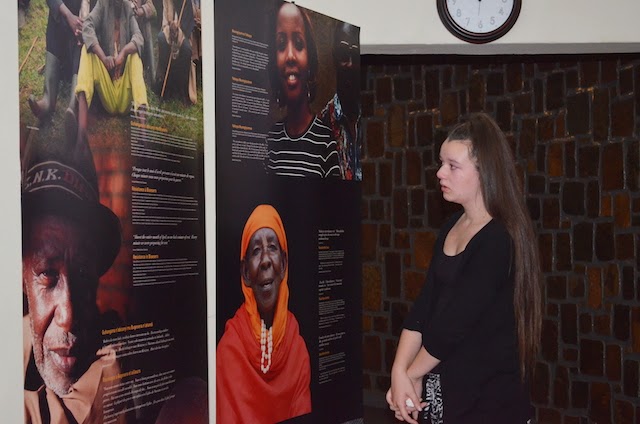 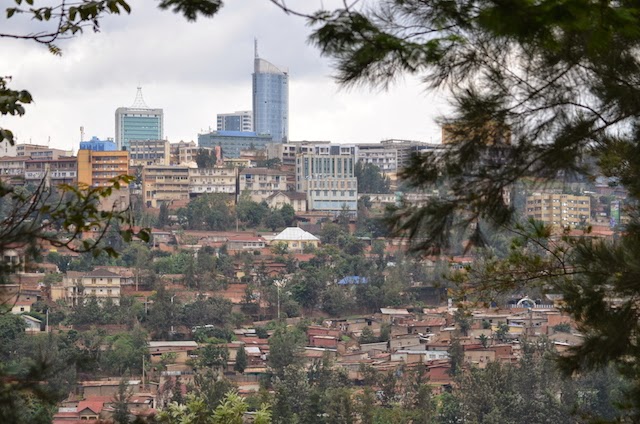 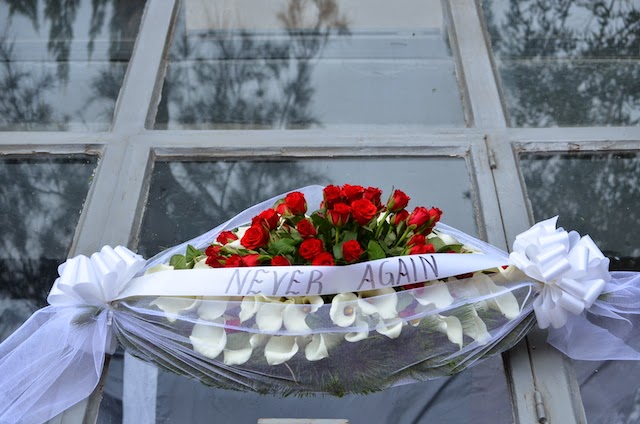 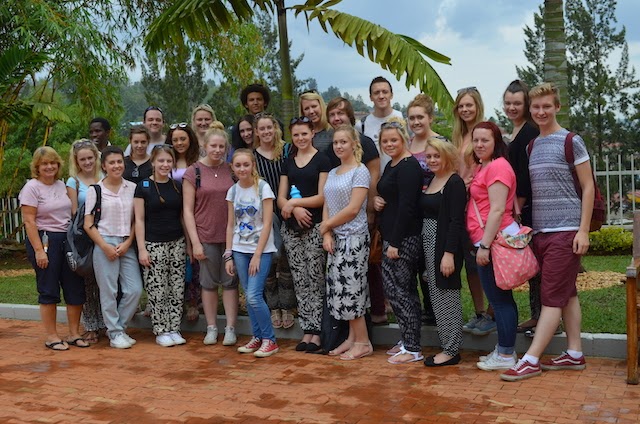 Posted by CRED Foundation at 17:05

OMG how emotional you must all feel!!!

Hi Charlie, I hope your having an amazing time in Africa. Sounds like your doing some work for once :DBrowner than me allready haha. Can't wait to see you When you get back love clay Xxxxxxxxxx

Hi Amber,
Hope you're having a nice time;not too emotional. I am counting down the days! Cannot wait! You're bravery is in my mind at all times. Love you lots and lots, courts xxxxxxx

Wow. Sounds very emotional. I bet could have cried eh Katie. Don't think I could have coped with it. By the way, I wasged your pink coat..... And your keys!!! Toby & jamie said they love you. Jake says hi (with his usual grunt ) Andy says don't catch anything & he misses you. I'm missing you too. Enjoy the rest of your week. Love you so much. See you in just over a week xxxxx

hi megan, danielle said get them converses off!! nans being an emotional wet wipe, bless her. weve just had our roast dinner and the table doesn't feel complete without you:( hope you're having an amazing time, your doing us all proud. were thinking about you every second of the day! its nice to see and read your daily plans. I bet it's been a very emotional day for you and your team, but everyones so proud. 8 days until we can see your beautiful face again. we love you megan, from mum, dad, nan, Danielle, asia, ryan and shane xx

Hi Cerys. Lovely to be reading the blogs and to see some of the pics so we can be part of your wonderful experience. I am sure it has been a very emotional day today but am sure you will all be supporting each other. Missing you lots and love you. Beef roast for dinner tonight!, hope you are having some nice food and haven't eaten all your goodies yet!! Lots of love, mum, dad, Rhi and Rocky.
Ps rock has taken over your bed at night. He's missing you.xxxxxxxxx

Hi mollie, what an emotion write up for us to read on the blog, can only imagine how special it must feel to be there and actually witness what you all are, the photo of you tells a story all of it's own, it will feel strange to not be doing you (meatball Monday lol)
Take care babe love from mum dad and pickle, xxxxxxxx

Must have been tough visiting the memorial Sophie - hope tomorrow is a happy day & you all enjoy working with the children. look forward to hearing more of your news. PS love the photo of you all :)

Good morning Lamara hope your enjoying the experience out there and are safe & well. We are so very proud of you & just remember what I said to keep your chin up & be strong.
Massive hugs, kisses luv u hun Dad, Oh yeah licks from Crystal & Winston ;) xxxxxxxxxx

Hi David,see you've still got the 'fro! Thought that would be either gone or be rowed by now.
I was on nights last night and showing everyone my gorgeous boy who I'm so proud of.
Big hugs dumplin' xxxxx Momxxxxx

Hi Aliesha.
So glad that you and the rest of the team made it after your long journey, now the real work starts with the children, enjoy and cherish every moment, my admiration goes out to you all for the challenges ahead.
Love Ahma and Gramps. xx

Hi sweetheart its mum, hope your having a good time and looking after yourself. The house is so quiet haha, talk to you soon. Lots of love mum xxxxxx

Hello Laila, hope your having a good time, you look hot in your pictures ha! Make sure you remember your darling sister when buying presents :) and i shall see you Monday! I'm sat with Lina and she wants to send a message too so here it is:

Hi auntie Laila, i love you please bring me back a present. And Laith says ahhhhhhhhhh.

So squidlips see you soon much love xxxxxxxxxxxxx

Hi mollie, not going to be the same going training without you tonight( in a quiet way I mean ) lol, hope you have all had a good first day doing what you all do best,
Haha Rebecca said to tell you that she has put the 1 direction poster up lol and she misses you as do we all. Love you lots mum, dad and Rebecca xxxxx
Ps hi to izzy and Joey xx

Its sasha, got to use mums account as not working for me! Hope your all having a gorgeous time and treasuring every minute! My birthdays not the same without you portia mum made me the cake it looks so good haha,going to save you a bit!me and mummy are missing you lots the house is so quiet! See you when your back,love you so much xxxxxxxxx

David and Stephanie Ross said
Hello darling the children look so happy wish we could be there with you. Yesterday looked emotional it's hard to believe that it could have happened. Look after yourself, girls both using the cat flap and enjoying the garden. Look after yourself. Lots of love mummy and daddyxxx12

Hi maddi, how are you sweetie? It looks like you are all having an amazing time. Make sure you take lots of photos. We are sat in gossip and the doggy Is here too. Make the most of every day. Love you lots, Mumsey moo, daddy, aunty Nita and uncle Derek xxxxxx