At the end of our teaching sessions, half of the group had the opportunity to do home visits, to discuss the lives of the women and their children that are living in the Acholi shanty towns. The rest of the team had some free play time with the children and will do home visits tomorrow. These are two of the stories we heard:

Rosie: Today I had the opportunity to meet a woman called Mary who lives in the Acholi shanty town. When I went into the building that she considered as her house, there was nothing but two mattresses on the floor and a wooden bench, with wet clothes draining from the roof and jerry cans that contained water. When talking to Mary, she explained to us how she doesn’t work and has little money for food and water to provide for her and her 6 children, because her husband had left her and her kids a long time ago. We discovered that Mary has 6 children, with 20yrs being the eldest and four being the youngest, but only one child, called Rose, has had the opportunity to go school.
As their home only had two mattresses, Mary and her 6 children had to share the two mattresses between them at night when they were going to sleep.  The experience of meeting Mary was a real eye opener because even though she was miserable and not happy living in Acholi and doesn’t have any family or friends to help support her, she still had a smile and cared well for her children to the best of her ability, considering she had hardly any food or water.

Sydney: I had the opportunity to meet a woman called Grace and her five children. When I went to her shanty home in the village, she had two mattresses with mosquito nets with holes in them, jerry cans and pans hanging from the ceiling with a wooden, broken bench. It was extremely cramped and could just about fit us all in the room. Grace also has to walk several miles up a hill just to get water.
When talking with Grace, she explained that she works all day in the stone quarry doing back-breaking labour for less than a pound a day. She also said how she has a heart and lung disease from all the dust at the quarry with no money to pay for health care.
Her husband left her and refuses to support her children, she has no other family except for her elderly mother, but her eldest daughter has moved in with her to help care for the children whilst she is at work.
When asking about food, Grace explained that she often goes without any food and water or even light as candles and food are so expensive in the dry season. None of her children have the opportunity to go to school but her 7 year old daughter is in one of our teaching groups, meaning her daughter no longer cries watching other children leave for school. I did find it a very emotional conversation but refused to cry in front of Grace, as this is her life everyday.

PS from all the team – we love to receive your comments on the blog, so feel free to send us as many as you’d like! 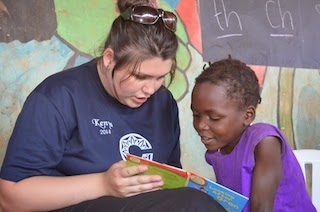 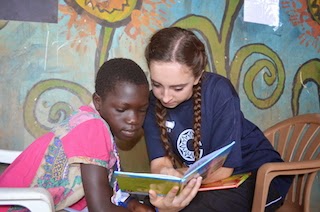 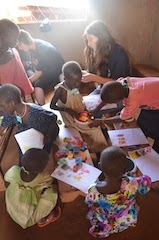 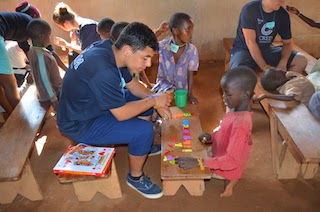 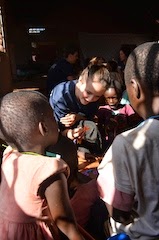 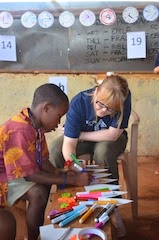 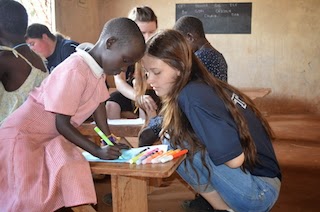 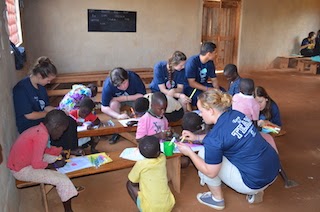 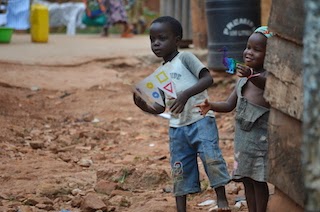 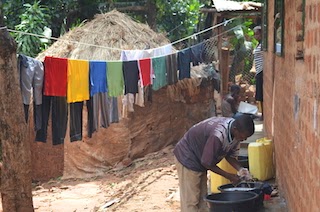 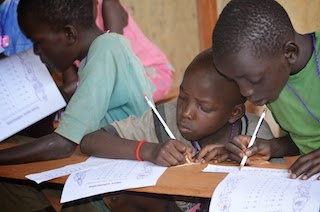 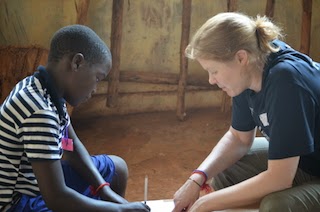 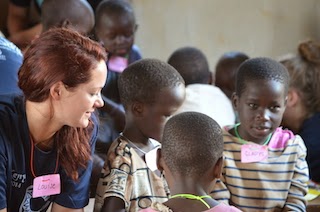 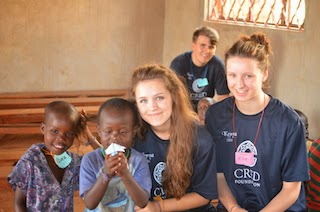 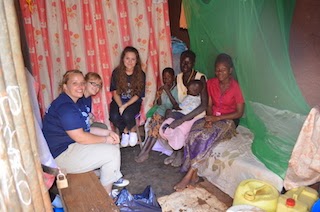 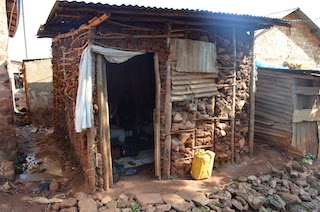 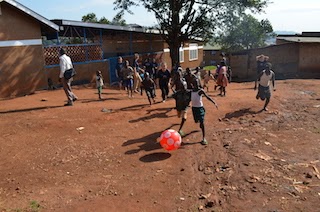 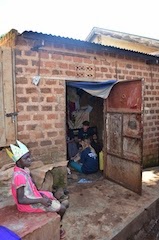 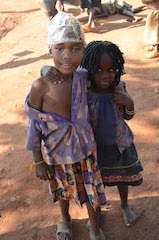 Posted by CRED Foundation at 17:44

Hi Everyone words can not explain how proud we are of all of you , it looks a tremendous experience and we can't wait for you to come home and tell us all your stories.
Its not just a eye opener for you but it also makes us appreciate everything we have as well, take care and we will see you soon :-) xx

Love the blog seeing how happy everyone looks must be very rewarding! Keep up the good work.
Thinking about you all xxxt

Hi dan dan, nice to see you in a picture, hope your all having an amazing time. I'm so proud of you dan keep up the good work missing you mum,hi dan same as mum ,bye,dad

Receiving these pics each day seeing what you lot are up to are just amazing! All of the families look forward to and wait for it every day and they are shared over and over again on facebook!! Looks like you are all having an amazing time and I am glad that you have all had this amazing opportunity.

Love to Vicki and all of you!

PS , Hi smelly no 1 we love you loads and missing you are you rocking in Uganda ??? , all our love mum dad Caitlin-rose Joseph and of course BRUNO XXXXX ❤️❤️❤️❤️

Reading the descriptions of the home visits, I'm amazed you managed not to cry. I'm filling up reading it, not a good look when you're reading it in a steelworks!
Well done to all of you, you're making everyone back home very proud, but more importantly you're making a difference to the lives of the children. Keep strong.

Love the photos today, & loving the daily blog, it's great to see & hear what you've been up to. Proud doesn't even come close !!!! Looks like such an amazing experience. Enjoy (if that's the right word) the last couple of days, see you all soon xxxx

Hi Phoebe looks like you are all enjoying your visit, looking at the pictures it makes us think of how different life is. You must all be proud of what you are achieving. Enjoy the rest of your trip and we look forward to seeing more pictures.
Dad

Hi Dan,
lovely to see a pic of you, hope you are having an amazing experience, can't wait to hear all about it. Aunty Deb, Uncle And, Jenny Bob and Simonx

Well after looking at the images you've posted and read all of the blogs written so far, you can all feel very proud of what you are doing to help the children and their families.

Its a fantastic experience for you to visit and see the real Africa but I'm sure no one realised what you would find when you got to your final destination, but one thing is certain you will never forget your time there.

All of you stay safe and enjoy the rest of your adventure, and keep posting those images. xx Lots of love Mike and Pat

All that hard work is now paying off. What a school trip; it will stay with the youngsters forever! We are so proud of what you all are doing, keep up the good work.

Hi guys!! What an adventure you're all having, an experience of a lifetime. So, so, so proud of you all, words cannot express how much! You should all be proud of yourselves for achieving something like this. We are all loving the pictures we are receiving every day, being posted on facebook for all to see!! Enjoy (if that is the right word to use) the rest of your time there. You will all learn alot from this experience, something you will carry with you forever.
Love you, miss you Jack, be safe, Mum, dad, jordan & shelly x x x x

So very proud of you all. What a lovely welcome by the women and children of the tribe, who obviously appreciate all your efforts. lovely to see your pictures and hear your stories, although heart breaking there is always hope. God Bless you all. Emma Whiting lots of love from all here Gma and Gdad and me.xx

tears at my desk. I dont know many of you but I have got big ears, no hair and a passion for Africa like you!

What you are doing is amazing. These new people in your lives, the ones you are teaching, playing with, visiting, encouraging, laughing and crying with, they are your new friends. You may never see them again face to face but your head and your heart will be full of there smiles, there pain, there challenges and there love.

Hold on to every moment and remember these days.

God bless you in all you do.

Great to see you working hard Hannah! Mr Smith says you can give him some hints on teaching when you get back. Sam doesn't really know what is going on, he thought you were at an open day or something??! Mark is looking forward to you coming back and the girls (who are actually in school on the last day)are planning for you to do a Form presentation already!

10Fantastic to be able to keep up with what you are doing and see the photos via the blog. You are doing a great job, even if it must be a bit overwhelming at times. But try to stay positive - remember, you are bringing your hosts something a bit different, some respite from the daily grind, and above all some hope! .

Reading these blogs after a night shift makes me realise they aren't that bad. It's heartwarming to see the team teaching the children and interact with the community. I feel humble that my daughter (Effy Nolder) chose to go on this trip and think it's great what you are all achieving. Great photos, fantastic blogs, continue the good work. (Beth)- it's quiet around home! But we miss ya!! Love Dad, Mum, Chloe and all the family. Oh and Grampy asks every morning "heard from Beth?" Xxxxx

Really enjoying the regular updates via the Blog. Amazing photos too! Glad to hear and see all is going well.

What an amazing team you are! It's good to see that the children are enjoying your lessons! Well done guys!