After all the build up and all the anticipation the team (except Jimmy, Rea and Kirsty - who hooked up with us at Heathrow) assembled at Oakmead and then sorted out the final position with our endless luggage.  The coach drivers were a little dismayed when they saw the sheer scale of what we were trying to move but hey ho, they applied themselves to the task and soon, after much weep a wailing and, I'm sure I saw some cheering from the parents, we were underway.  A speedy and event free journey got us to Heathrow in double quick time and we met up with the other three - tee-shirts on and after a temporary release for the chicken it was the whole hassle of check-in and getting through security.  After a surprisingly painless transition we were airside in Terminal 3 and with a bit of time to get a last sample of English food before the off.  8pm soon arrived and then it was final checks and through the gate to Ethiopian Airlines flight ET701 for Addis Ababa.  The engines roared, Becca and Charlie buried their heads and with rumble we were up in the air with the lights of London disappearing below us.  Next stop Ethiopia... 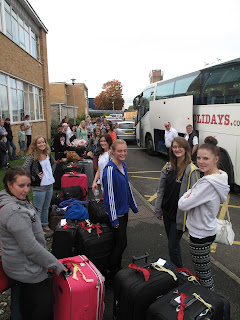 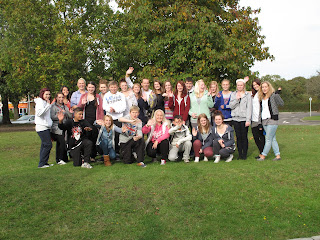 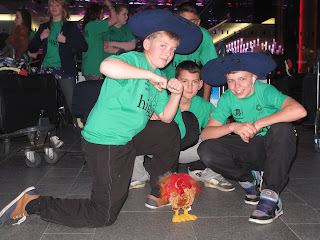 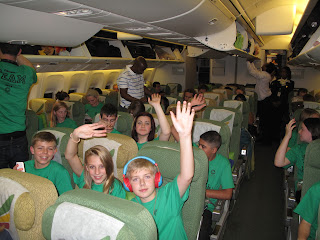 Well the day started very early for us all, in fact for some I'm not sure that Saturday really ended properly as the combination of excitement and not very comfortable seats meant an all night vigil.  So as the lights of the aeroplane raised us from the little sleep we had snatched the day began.  So it was sunrise over Africa, yes it kind of made you feel like you were actually there that the 3,600 odd miles had made a difference, had transported us to  genuinely different place.  So with a few white knuckles and a few dazed, tired looks we touched tarmac at Addis Ababa airport.  Then we prepared ourselves for the drudgery of the normal airport clearance processes.  Immigration first - where are you staying?  We've never heard of the Lido Hotel.  Well that hurdle cleared we took on the challenge of baggage claim for 60 pieces of luggage - not as bad as we thought because of the red and yellow ties on every bag.  We were on a roll now, trolleys laden and performing their own version of the trolley sideways-slide, we steeled ourselves for the trauma that is clearing security and customs.  But wonder of wonders, after a few quick questions between us and the customs official he just waved us through - not a bag scanned, not a case opened and embarrassing questions about why we had oh so many cans of shaving foam!  The chicken even made it through unscathed.  Then it was onto the challenge of how you get those 60 bags, 30 people and all that hand luggage (including said chicken) into three normal mini-buses.  Challenge?  Not for our trusty drivers and their enthusiastic porters (enthusiasm driven by a tip of a few hundred Birr).  Soon we were all loaded up for the steely progress into Addis and to our hotel.  The Lido welcomed us once more with smiley faces and lots of rushing around to finish preparing our rooms - so bags unpacked, rooms allocated it was time for a quick forty-winks to refresh us for the rest of the day.  Soon it was lunch and then it was time to deal with all those resources that we had brought - a BIG thank you to any of you who so generously contributed to it - seeing it spread out all over the courtyard and the teams sorting like loonies was a sight to behold.  The sun shone down and in the beauty of classic ethiopian afternoon it was sorted and stashed back ready for action.  Then time for a bit of relaxation and to take in the wonderful city of Addis Ababa.  We set of for the top of one of the hills overlooking the city to have better view of our home for the week.  This trip was not quite as straight forward as we anticipated, if travelling in Addis is ever straight forward!  First off as we were observing the sprawling show of world power that is the US Embassy one of our buses got pulled over by a rather officious gate guard who accused someone on the buss of having the cheek to photograph the rather imposing outside wall.  After about 30 minutes of debate with the over zealous guard we were on our way up the hill again.  But then double disaster for Dera's bus, it had a bit of an overheating problem (perhaps from being sprayed with all the hot air by the friend of the US Embassy!) so without really getting to the top of the hill we descended at a leisurely pace, keeping eyes front on the way past our special friends from across the pond's palace and off to dinner at, somewhat ironically New York, New York an american diner!  Then with full stomachs and weary heads we returned the the homely Lido for a well deserved nights sleep…..zzzzzzz

PS - Shout out to St. Aldhelms BTEC Performing Arts -  Yo! I hope you are being good for Steve! Miss you! 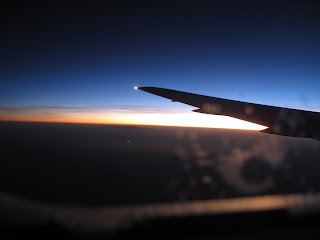 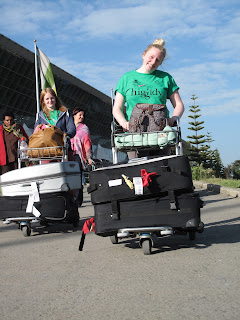 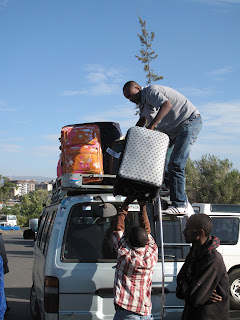 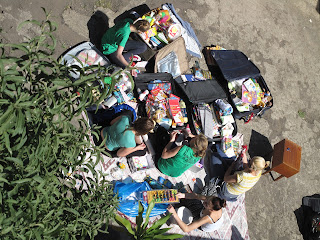 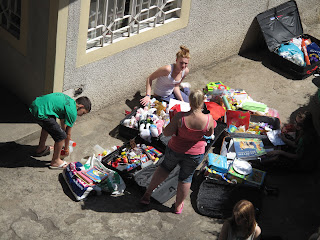 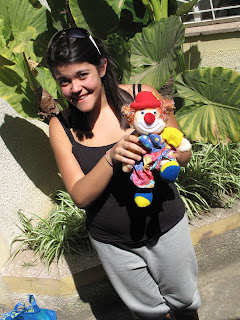 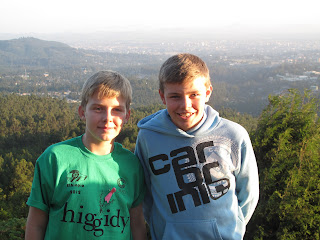 Posted by CRED Foundation at 16:14

Interesting already!!! Great picture of Zeynep and her clown! Hopefully the rest of the week will run smoothly and fun will be had by all. Great blog and great pictures - keep them coming!! Love to Zeynep - Lucy and Will xxxxx

Ahh sounds eventful and fun already, cant wait to hear how its going with the nursery children. Pics are fab, keep them coming. xxxx

Sophie jayne, its amy calling from UK the pictures look amazing so far but by the sounds of it you had an eventful day today! Hope your not to tired, nd the beds comfy because yours has treated me nicely so far mwaha! Cant wait for the next blog to hear about all of your amazing adventures, ENJOY and have fun. Lots of love Mum, Amy and of course cokey xxxxxxx

Hello to Rea Forbes am following the blog hope ur OK' bet u were happy after being in the American diner!!burger & Chips? Think I saw a pic of u in the yellow top? Enjoy c u soon dad & mum x

Amazing pictures so far :) Shannon Shepheard, Missing you lots. Your mum couldn't figure out how to leave a comment lol, so i have been told to leave one for her ;) she says hello and she hopes your having a wonderful time! Love you lots xxxxxxx

Looks even more amazing than i remember! There is a lack of Tare, my wonderful Ethiopian man though! Take care xxxx

Hi chick, hope everything is well and you are enjoying it, jas has Got your space in the bed, speak soon love you xxxxx

sounds brilliant so far! even the chicken is having fun!!! great photo of you on the plane Victoria, hope you're ok and enjoying the food?!?! have you had scrambled eggs and chillis yet? Have a great first day with the children tomorrow, can't wait to see how you all get on. Boring piece of info, new washing machine installed after other one broke! love you xxxxx

wow it all sounds amazing, hope you are all having an amazing time.loving the pics and hope there is more to come.
a message to mollie from rebecca " hope your enjoying yourself and she is missing you loads.
stay safe all of you.
love you mollie love mum,dad and rebecca xxxxxxxxxxxxxx

Sounds like you've had an eventful first day. Loving the team t-shirts, you all look fab.hope you have a great day tomorrow with all the kiddies, can't wait to see the pics. Love ya lots nas, love mom and all the family. P.s. Your nan is following the blog but she can't understand how to leave a message. She sends you her love too x x x

Hi Em, hope you're well and having a great time. We're enjoying reading the blogs and looking through the photos. looking forward to the next updates. Take care, love mum, dad & our technical expert Simon xx

Hi Nas its Phil, glad to see you arrived safely, how was the plane journey? Hope your having a gd time and remember why you went there and fulfill your dream. Mom says have you seen any bob marley things?lol. Hope your enjoying your work. Take care and see you soon, Phil x

Hi Nas its Phil, glad to see you arrived safely, how was the plane journey? Hope your having a gd time and remember why you went there and fulfill your dream. Mom says have you seen any bob marley things?lol. Hope your enjoying your work. Take care and see you soon, Phil x

Hello Will and Dan!

We hope you are having a good time and not missing school too much! Kyle and Alex miss you a lot, they cried on Monday morning because you weren't here. ;-) Hope you enjoy the rest of your experience, we are looking forward to hearing all about it when you get back!

Hey guys, sounds like loads of fun already! I hope you have a fantastic time working. Enjoy every moment. So proud of you all. Can you say a big HI! To Jade, give her a big squeezy hug from me! Tell her patch and coc send big slobbery kisses!! Beki misses you. Love you loads little sis <3 xxxxxxxxxx

Hi soph hope you are still all having fun fun fun and working hard (i am sure you all are) all missing you loads but knowing you are having an amazing experience makes it easier. Love you lots and miss you loads love mum, amy and cokey (who by the way is still not eating properly) say hi to beca and issy to from us xxxx