Last day of action with the children today - so it was up early anticipating the emotions of the last day with our new little friends.  Everyone was up and ready on what had transpired to be a Muslim holiday across Ethiopia - outside as we prepared to leave the streets were filled with Muslims making their way to celebrate their festival.  A massive throng of worshippers making their way down our street on foot - some led in prayer as they made their way.  There were many smiling faces in the streets as they set off to celebrate their special day.  Soon it was into the buses to make our way to our final appointment with the children but such was the volume of people around that one of our drivers was delayed arriving and then once we were on the way, the traffic was so snarled up that it took us far longer than normal to make our way across the city.  We eventually arrived late to the tune of about 40 minutes and got a friendly scolding from the Kindergarten principal.  It was strange for them because they had come in especially for us on the public holiday and the children too.

So it was off on the day's somewhat curtailed programme.  Just a couple of activity slots and then a whole lot of farewells to both children and staff alike.  Presents distributed and not a few tears wiped away it was time to walk out of the Kindergarten gate for the last time.  Many happy memories to take home with us - our lives permanently imprinted with the love that the little ones and their staff had shared with us - what a privilege, what a joy, what wonderful people!

Then it was down to the youth centre for the shortened morning session after school club (even though there wash;t any school).  When we arrived the was already a noise emanating from the centre - the kids were already in wand waiting for us.  The brilliant team swung quickly into action forgetting there sadness from up the road and getting on with the new task in hand.  Another high energy, high excitement, high volume session followed and once again some sad goodbyes followed - but it all ended with a real sense of a job very well done.

A final chance to sample the hospitality of our lunchtime hosts and then it was an afternoon at the Hilton for a swim, some ice-cream and a bit of a relax after the week's hard work.  All very satisfying.

The evening saw a chance to really sample a slice of Ethiopian culture at a cultural restaurant.  Local food, local music and local dancing - so many new things to sample.  The team stretched their taste buds to their limit and in some cases their stomachs - some were even brave enough to take on ngara and the local tripe dish.  Then it was more music and dancing - some of the team did us proud by being called up onto stage and trying the skills with the local complicated dancing.  The highlight of the the evening was when one of the Hannahs (I won't tell you which of the three - you'll have to find out for yourself) was involved in a mock Ethiopian wedding ceremony with Anni!!  As the emotions of the day started to catch up with people tiredness kicked in and it was time to make our way home to bed. 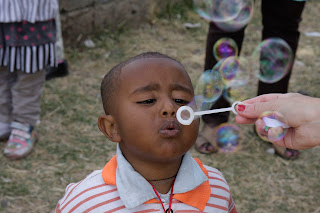 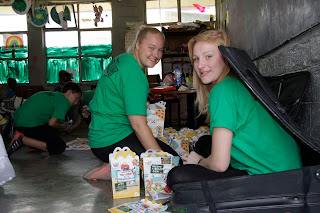 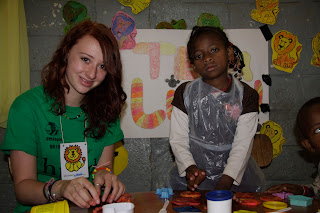 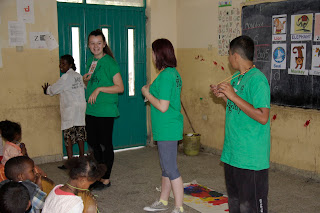 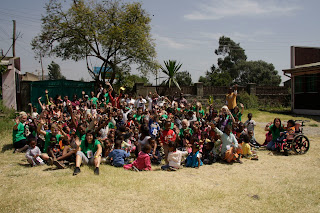 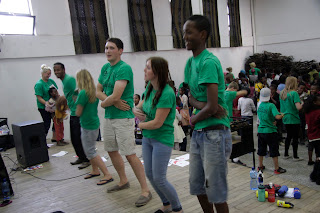 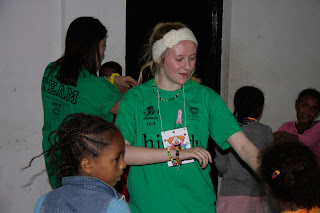 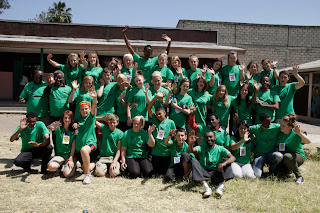 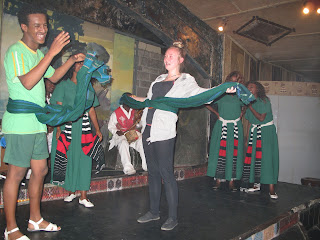 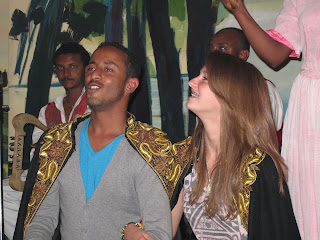 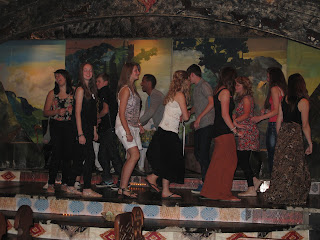 A bit of a lie-in this morning - it was time to do the very English activity shopping!  Everyone was getting ready to go out and try out their bartering skills.  After the normal speedy breakfast a few ground rules explained and it was off to try and grab those bargains.  First there was a drive through Africa's biggest market the sprawling Mercato - you can buy just about anything there - goats, washing up bowls, steel tubbing, wooden scaffolding, spanners, televisions and the reason for venturing into this noisy, excitable chaos - garbies - traditional Ethiopian woven garments/ blankets.  Anni directed those of us interested to the best deal in town and after some hard deals were brokered it was back onto the buses for a slightly more controlled environment for the rest of our shopping.  Many of the team displayed great flair for bartering and soon were driving hard bargains with the locals in order to get what they were after.  Once satisfied the team set off for a well deserved lunch at Kaldi's - Ethiopia's equivalent of Starbucks - so equivalent its logo looks like it was designed by Mr Strabuck himself (but don't tell him!)

In the after we split up into a couple of groups.  One went back to the Hilton for another afternoon's relaxing there.  Whilst one bus set off to the home of our footballing friend from last year Yared and Abraham as they had invited us to a coffee ceremony with them.  It was a real pleasure to have such an honour in a real Ethiopian home - lots of chatting and plenty of very good local coffee - hand roasted, hand ground and and all prepared over and open fire accompanied by the heady aroma of incense.  Whilst we there we had the strangest of experiences - it rained - my third year in Addis and the first time I have every seen a drop of the stuff - perhaps it was to prepare us for the return to dear old blighty!  Farewells said the coffee drinkers hooked up with the rest of the team at the Hilton and then returned to the hotel for dinner and a chance to chat and reflect on the week we had experienced together.

Then it was a relatively early night ahead of the football with the locals at 6am Sunday morning in the road outside the hotel. 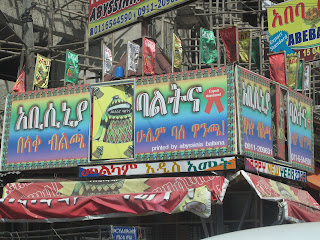 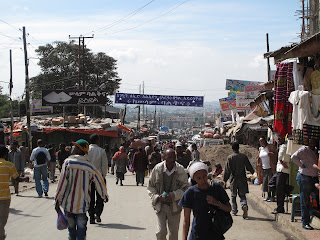 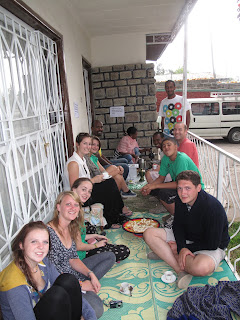 The alarm went off even earlier this morning ready for the early mooring football ritual here.  Many of the locals gather outside the Lido each Sunday morning on the steep hill to play street football.  Bit by bit the team emerged from their slumbers and joined the intrepid team of footballers we had put together.  Major blow early on our big box-to-box dynamo Jimmy was laid up in bed with man-flu (Kirsty and Hannah's diagnosis not mine) so we were a little light weight and in some cases height light!  But after losing the first match 3 : 1, we were given a rest by Yared while another game was played - he said "You have a rest another team play - then we play you for the cup!  Sitting on the wall by the side of the street was the little trophy "The Upton Park Cup" which we would now be playing for - Oakmead competes in its first international football tournament.  The team performed brilliantly despite the rarified atmosphere and following some cool finishing and solid goal-keeping a 3 : 2 victory was secured and the cup was ours.  We will bring it back to the UK with pride.  Some of the locals had drifted out to see what was going on and some skipping and bubbles games were played before people gradually wandered back inside for breakfast.

Breakfast and showers over it was time to go out for the day to the beautiful Debre Zeit.  Our trusty fixer Anni had promised us a hot and sunny day so it was with great anticipation we set off on  the road filled with trucks and goodness knows what.  Travelling on Ethiopian roads is, interesting, at the best of times and overtaking seems to be done pretty much on faith that if someone is coming in the opposite direction they'll get out the way!  We arrived in Debre Zeit and settled in for a nice day under the Ethiopian sun. The man in the white coat brought us drinks with wonderful regularity, the birds sang and some of the team even ventured out onto the lake in a boat.  Then the cruel deception of our local version of Michael Fish was revealed.  For the second time in two days it rained - it rained in Ethiopia.  It rained on our picnic - it was like being at home - but with our stoical British resolve we stuck it out for a while until eventually as people began to get cold(!) we threw the towel in and set off home.

When we arrived back it was time to get the inevitable packing done.  How do I pack was heard from one of the boys.  How does my mum get it in so neatly came from one of the girls.  But eventually it was all stuffed in and then it was time to be off for the final meal together.  A lovely Chinese with more than enough to eat.  Then there was just time for a few awards to be given out.  Ranging from Best Hairdresser to Best Sunburnt Nose!

Finally it was back to the hotel and early to bed - everyone up at 5am ready for the journey home. 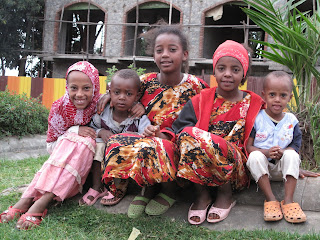 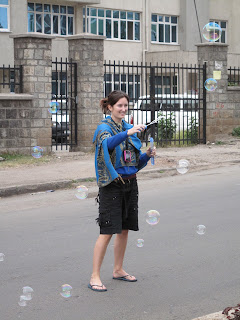 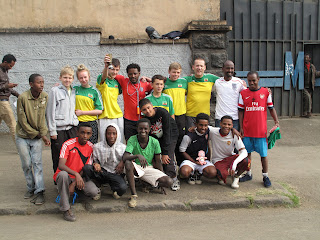 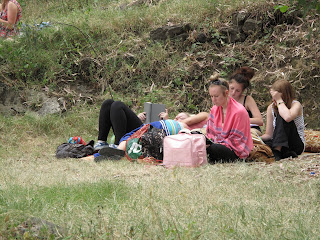 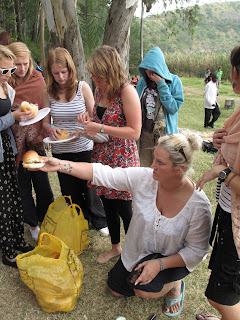 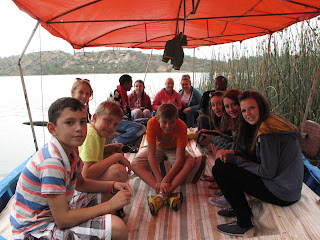 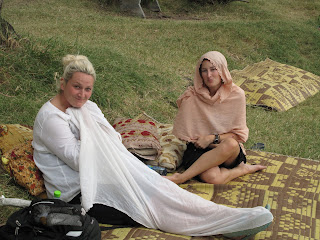 PS - We're back - lots of very tired people after 19 hours on the move but very pleased with what we've managed to achieve.  Thanks for everyone's support and interest.

Posted by CRED Foundation at 21:38